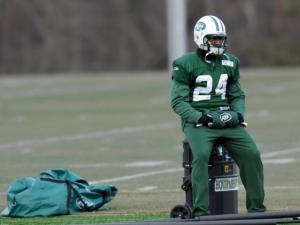 Jets Owner Woody Johnson never shy about speaking about his team, didn’t shy away from stating that “If somebody wants to make an offer, for any of our players, we’d always listen,”. Maybe Woody doesn’t realize that most of the players that everybody wants from the Jets have left via free agency. His statement leads one to believe that Revis won’t be a Jet either by the draft or by the start of camp. By the way, the thought that the Jets have to hold on to Revis and wait until the season start, so that teams can see how he plays and how he has rebounded from his knee injury doesn’t hold much wait. How long has Revis been a player in the NFL? The league knows everything about every player and knows how good Revis is. Anyone who is interested (49ers Bucs) don’t need to wait into the season to see if he ready to go. First the NFL season doesn’t work like most seasons, it is 16 games and very seldom will you find teams make trades once the season starts especially one of this magnitude. That is why if anything the Jets will trade Revis around the draft. To start the season with Revis on the Jets roster does nothing for the Jets but leave them with a unhappy player. They know they are not going to pay him what he wants, they are further away from winning a Super bowl at any point in the Rex Ryan era, why hold on to him into the season risk him walking away at the end of the season and get NOTHING for him. This is why the smart move is to trade him now closer to the draft or on the draft and get the best deal you can get for Darrelle Revis and speed up the rebuilding process.