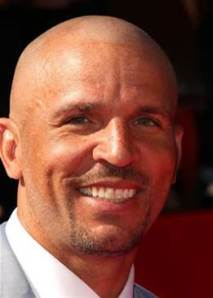 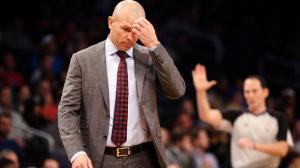 He was a gifted point guard who knew the game. He was someone who saw the whole develop long before it happened. That was on the court. Off the court he continuingly reminds us he leaves alot to be desired. It appears everywhere he goes he forces the issue and either coaches fall or he works his way of a situation to somewhere else. His domestic troubles with his wife led him to be traded from Phoenix to the Nets. Apparently things turned ugly in Dallas between Jamal Mashburn, Jimmy Jackson and himself over Toni Braxton. He butted heads with Byron Scott and got the coach fired. He tried to power his way to San Antonio until the Nets made him a offer he couldn’t refuse and then after a few season he power played his way back to Dallas. No sooner after last season ended with the Knicks he retired and moments later he was announced as the new head coach of the Nets. That should have been enough right? No. Kidd wanted more …more what? More money and more power. After Steve Kerr who never coached and Derek Fisher who also did the same exact thing Kidd just last season go from playing to retirement to coaching in a heart beat got better deals than Kidd who, coached now only one season started his exit strategy out of Brooklyn. The stories that come out now are that he and Billy King didn’t exactly have the warm fuzzies for each other (No surprise that Kidd didn’t). When the Nets were 10-21 King looked to remove Kidd as coach thinking maybe he was in over his head, then the Nets went 34-17 and made the second of the playoffs against the Heat. Everyone started to feel better about the season as a whole and was looking forward to next season all except …Jason Kidd. He pulled a Larry Brown, if he couldn’ get what he wanted from within the Nets, then he was getting elsewhere. Elsewhere in this case was Milwaukee. The Bucks who haven’t been relevant since Marques Johnson and Sidney Moncrief walked out the door, and Michael Redd blew out his leg, are happy to be getting Kidd. But it came at a price both now and in the future. Now it’s two second round draft picks and it cost Larry Drew his job as head coach. Oh yes you didn’t know? The Bucks already had a coach when Kidd made his power play to Milwaukee. Kidd broken an unwritten rule among coaches of not to go after a job that another coach already has. In this case Kidd broke that rule. Drew is kicked to the side as if he didn’t matter and Milwaukee will at some point pay for that. See the problem is Kidd will get what he wants …for now he has a friend in Milwaukee that give him more power and more money, end of story right? Not so fast …this is Jason Kidd we are talking about here. So at some point Kidd will get bored of life in Milwaukee want out and pull a power play to do so. In the meantime as with the Knicks there wil be off the court issues like the DUI he had to start last season when he was with the Knicks. With Kidd it is always something.
He will be presented at a press conference in Milwaukee, he will say things about him are overblown in the New York Media …he will talk about commitment to the team the organization, he will smile an say he is happy to be there and everyone will go wow why did the Nets let him go? They’re crazy, and then Kidd when the opportunity presents itself will show his true colors … again as he always does.

One thought on “Jason Kidd showed his true colors… again”