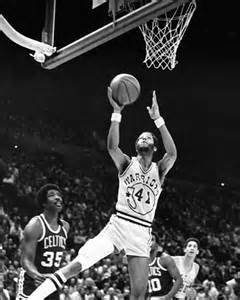 One of the smoothest, steadiest and most productive forwards to ever play in the NBA (he possessed a deadly accurate jump shot from the corner that Hall of Fame Laker announcer Chick Hearn dubbed the “20 foot layup”) Jamaal “Smooth as Silk” Wilkes won championships at the scholastic, collegiate and professional levels.

In March 2007, he was inducted into the Pac-10 Men’s Basketball Hall of Honor. In an interview with the New York Post in 1985 and in several public speaking engagements, legendary coach Wooden stated, when asked to describe his ideal player: “I would have the player be a good student, polite, courteous, a good team player, a good defensive player and rebounder, a good inside player and outside shooter. Why not just take Jamaal Wilkes and let it go at that.”

In 12 professional seasons with the Golden State Warriors, Los Angeles Lakers, and Los Angeles Clippers, Wilkes was a member of four NBA championship teams – one with Golden State in 1975, the season he was named Rookie of the Year – and three with the Showtime Lakers (1980, 1982, 1985), though an injury prevented him from playing in the 1985 NBA finals against the Boston Celtics, yet the Lakers’ won the series in six games over the Celtics, 4–2. One of the most memorable games of his career was the series clinching Game 6 of the 1980 NBA Finals against the Philadelphia 76ers; Wilkes had 37 points and 10 rebounds, but was overshadowed by rookie teammate Magic Johnson, who started at center in place of an injured Kareem Abdul-Jabbar and finishing with 42 points, 15 rebounds and seven assists. “Jamaal Wilkes had an unbelievable game,” said Johnson in 2011. “Everybody talked about my 42 [points], but it was also his [37-point effort].

Selected by the Golden State Warriors

Basketball Hall of Fame as player