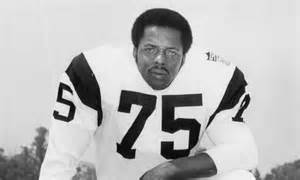 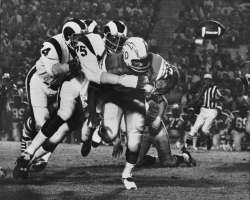 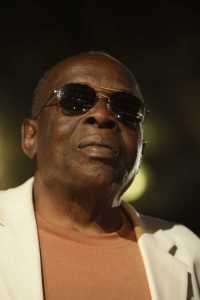 Smallthoughts;Old School Tuesdays usually follows a theme…this week it is all about the defense. You just saw highlights of Dick Butkus. Now we are going to highlight the Fearsome Foursome…First up the man who coined the phase  Quaterback sacks… The Secretary of Defense …Deacon Jones.

Deacon Jones specialized in quarterback “sacks”, a term which he coined. Nicknamed “the Secretary of Defense”, Jones is considered one of the greatest defensive players ever.[1] The Los Angeles Times called Jones “Most Valuable Ram of All Time,” and former Redskins head coach George Allen called him the “Greatest Defensive End of Modern Football”.[

Jones was drafted in the 14th round of the 1961 NFL Draft by the Los Angeles Rams. He then earned a starting role as a defensive end and teamed with tackle Merlin Olsen to give Los Angeles a perennial All-Pro left side of the defensive line.[5] He became a part of the Fearsome Foursome defensive line of the Rams (along with Lamar Lundy, Rosey Grier, and Olsen), which is now considered to have been one of the best defensive lines of all time.[6]

Jones, in an interview with Kevin Jackson[7]

In 1972, Jones was included in a multiplayer trade with the San Diego Chargers, where he was an instant success.[5] He was named San Diego’s defensive captain and led all Chargers’ defensive linemen in tackles and won a berth on the AFC Pro Bowl squad. He concluded his career with the Washington Redskins in 1974.[5] In the final game of his NFL career, the Redskins allowed him to kick the point-after-touchdown for the game’s last score. Along the way, Jones was named the Associated Press NFL Defensive Player of the Week four times: week 14, 1967; week 12, 1968; week 11, 1969; and week 10, 1970.

An extremely durable player, Jones missed only six games of a possible 196 regular-season encounters in his 14 National Football League seasons.[5]

Jones was considered by many to revolutionize the position of defensive end. He was credited with coining the phrase “sacking the quarterback”.[8] In 1999, Jones provided an L.A. Times reporter with some detailed imagery about his forte: “You take all the offensive linemen and put them in a burlap bag, and then you take a baseball bat and beat on the bag. You’re sacking them, you’re bagging them. And that’s what you’re doing with a quarterback.”[4]

What separated Jones from every other defensive end was his speed and his ability to make tackles from sideline to sideline, which was unheard of in his time. He also was the first pass rusher to use the head slap, a move that he said was, “…to give myself an initial head start on the pass rush, in other words an extra step. Because anytime you go upside a man’s head … or a woman; they may have a tendency to blink they [sic] eyes or close they eyes. And that’s all I needed. “[9] “The head slap was not my invention, but Rembrandt, of course, did not invent painting. The quickness of my hands and the length of my arms, it was perfect for me. It was the greatest thing I ever did, and when I left the game, they outlawed it.”[4]

Pro Football Weekly reported he accumulated 173½ sacks over his career, which would be third on the all-time sack list. (Jones would have ranked first all-time at the time of his retirement, and since has been surpassed by two fellow Hall of Famers Bruce Smith and Reggie White.) [10]

In 1967, Jones had 26 sacks in only 14 games, which (if official) would stand as the single-season record. (The term “sack” had not yet been coined at the time, and official sack statistics were not recorded by the NFL until 1982.) Then in 1968, Jones tallied 24 sacks in 14 games, also more than the current NFL record.[11] The sum total of these two seasons would account for 50 sacks in two seasons by Jones, far more than anyone else has ever achieved.

He was elected to the Pro Football Hall of Fame in his first year of eligibility in 1980, and was named to the NFL’s 75th Anniversary All-Time Team in 1994.[1] In 1999, he was ranked number 13 on The Sporting News list of the 100 Greatest Football Players, the highest-ranked player to have played for the Rams franchise, the highest-ranked defensive end, and the second-ranked defensive lineman behind Bob Lilly. The same year, he was named by Sports Illustrated as the “Defensive End of the Century.