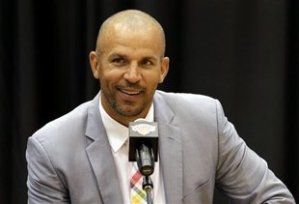 Other than Julius Erving and Bernard King, he was the best player this franchise has had since it joined the NBA in the mid 70’s from the no longer in existence ABA. Yet they have a funny relationship with Jason Kidd. When he first arrived via a trade with the Phoenix Suns for Stephon Marbury, Kidd was looked at as a beacon of hope for a Franchise that lost it way. For Kidd it was a chance to wash the stink of a domestic violence charge away with his then wife Joumana Kidd. So both parties, the Nets and Kidd needed each other. It turned out that worked well for the Nets, Kidd made them respectable, made them title contenders…the Nets reached the NBA finals two straight years 2001-02 and 2002-03. Kidd an unrestricted free agent in 2003 had a serious flirtation going on with the San Antonio Spurs. The Nets had no control and could only hope that Kidd liked the New York area enough to want to stay verses going to a title contender like the Spurs. Kidd for some reason had then control of the Nets it seems always had and always will. He return to the Nets and signed a 6yr -99 million dollar deal. In time Kidd clashed with Byron Scott the teams head coach at the time and Scott was then fired. When his playing career was done in 2013, it was the Nets that came to Kidd’s rescue and hired him with no previous coaching experience as their new head coach. And they stuck by him when the team got off to a 10-21 start to his coaching career. You would thin that would have been enough for Kidd, giving the history with him and the Nets ….but no he wanted more …he wanted his boss Billy king’s job. When he was told no…he said fine I’m going to Milwaukee. Seriously Jason? really? Mikhail Prokhorov the team owner had every right to say at that point …don’t let the door hit you on the way to Milwaukee Jason.  Kidd has denied that he wanted more control …yet his remark of  “Billy’s the GM. He put the Brooklyn Nets together, so it is what it is” was a diss. This is a franchise that gave him his first coaching job with no prior experience. They were will have him stay but once he pulled the power play …well you know the rest. So fast track to the other night(Wednesday, November 19th) when the Nets played the Bucks when the Bucks beat the Nets in triple overtime you know Kidd was in his glory beating his former team…but just one question …so what? You made that happen by forcing your way out of Brooklyn, not Brooklyn firing you after you got off to a 10-21 start. Things are going good for Kidd now, but you have to wonder how long will it be before he is forcing his way out of Milwaukee on to somewhere else.