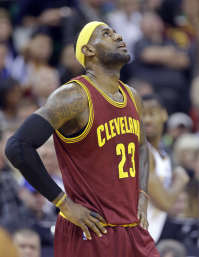 For a team with Championship dreams this could be a nightmare as their top player and a huge part of their offense will be on the shelf for two weeks with Knee and back injuries. Lebron James’ injuries were revealed Wednesday after he had a physical exam, radiographs and an MRI. He had missed the previous two games with a sore left knee and has missed three total games this season.

James has previously never missed more than seven games in any season.

“It’s been hurting pretty much all year,” James told the local media Wednesday. “I’ve been playing with it. It goes away and comes back.”

James, 30, is averaging 25.2 points, 7.6 rebounds and 5.3 assists this season. The most consecutive games he has missed in his career are five during the 2007-08 season with a finger injury.

The Cavaliers recently lost center Anderson Varejao for the rest of the season to a torn Achilles’ tendon. Forwards Kevin Love (back spasms) and Shawn Marion (ankle) also have recently been sidelined with injuries.