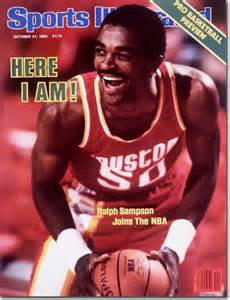 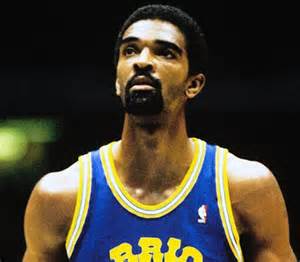 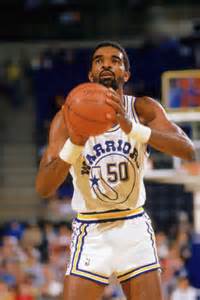 With his size and agility Sampson was expected to score like Wilt Chamberlain and win championships like Bill Russell when he reached the pros. The Houston Rockets made him the No. 1 pick in the 1983 NBA Draft.[2] As a rookie he averaged 21.0 points and 11.1 rebounds, played in the All-Star Game, and won the NBA Rookie of the Year Award.[3]

The Rockets managed only a 29–53 record in 1983–84 and again “earned” the right to pick first in the 1984 NBA Draft, choosing Hakeem Olajuwon out of the University of Houston. Many observers criticized the Rockets’ choice, believing the two 7-footers would not be effective playing together, while others thought the combination could be overpowering. Sampson, playing a new style of power forward, had new expectations placed upon him. At the time, Dallas Mavericks Coach Dick Motta said, “That front line, when history is written, when they’ve grown up, might be the best ever assembled on one team. Ever.” Houston guard John Lucas said of Sampson’s move to forward, “He’ll revolutionize the game.”

In 1984–85 the Rockets improved by 19 games to 48–34 and made the playoffs for the first time in three seasons. Sampson had his best individual campaign, averaging 22.1 points and 10.4 rebounds and earning a berth on the All-NBA Second Team. He and Olajuwon both played in the 1985 NBA All-Star Game, and Sampson, after scoring 24 points and grabbing 10 rebounds, earned the game’s MVP Award.[4]

The next season Houston won the Midwest Division with a 51–31 record. In the playoffs, the Rockets swept the Sacramento Kings, but faced a stiffer challenge against Alex English and the Denver Nuggets in the Conference Semi-Finals, eventually winning the series 4–2, with the sixth and deciding game going to double overtime. Against the defending champion Lakers in the Conference Finals, the Rockets were ready to knock off their rivals who had the best of them during the season. The Rockets lost game 1, but the Rockets fought back, winning four straight to take the series four games to one. In Game 5 of that series, Sampson provided one of the most memorable moments in NBA Playoff history. With the score tied at 112, Olajuwon having earlier been ejected, and with only one second remaining on the clock, Sampson took an inbounds pass and launched a twisting turnaround jumper that sailed through the hoop at the buzzer, giving the Rockets a 114–112 victory and a shocking series upset.

In the NBA Finals the Rockets faced the Boston Celtics. Boston sportswriters were not happy about not getting revenge against the Lakers who had beaten the Celtics in the Finals the year before, but the matchup was interesting with the young front court challenging the old guard of the Celtics. During the season at the Boston Garden, the Rockets were playing the Celtics well until Sampson suffered a jarring fall on his back. At the start of the Finals, Sampson quickly found himself in foul trouble early in Game 1 as Boston easily went up 2-0 going back to Houston. The Rockets won a close Game 3 under the leadership of Sampson. Game 4 also went down to the wire with the Celtics pulling it out on late Larry Bird 3-pointer heroics and untimely turnovers by Rockets guard Mitch Wiggins. In a similarly close Game 5 in Houston, (under the 2–3–2 format) Sampson succumbed to taunting by the much smaller and less important Boston’s 6-foot-1 backup guard Jerry Sichting resulting in Sampson taking a swing and earning an ejection from the game. Strangely, this fired up the Rockets, who won Game 5 by 15 points without Ralph thanks to the inspired play of Olajuwon, Jim Petersen, and Robert “Bobby Jo” Reid. Game 6 went back to Boston with Sampson finding himself again in foul trouble and of little effect against the older and wiser Celtic front court of Bird, McHale and Parish. After the series, Boston coach KC Jones called the Rockets, “the new monsters on the block” with the future looking very bright for the Rockets. During the six-game championship series loss against the Celtics, Sampson averaged 14.8 points on .438 shooting, 9.5 rebounds and 3.3 assists per game.[5]

Injured halfway into the 1986–87 season, Sampson fell out of favor with Rockets Coach Bill Fitch and was traded, along with guard Steve Harris, to the Golden State Warriors forEric “Sleepy” Floyd and Joe Barry Carroll. But Sampson’s knee and back troubles worsened, and he never played a full season in his four seasons with the team. He averaged 6.4 points and 5.0 rebounds with Golden State in 1988–89 and was traded to the Sacramento Kings for Jim Petersen. Sampson’s injury issues continued in Sacramento as he totaled just 51 games in two seasons, averaging 4.2 and 3.0 points, respectively, in 1989–90 and 1990–91. Released by the Kings, Sampson played a 10-game stint with theWashington Bullets in 1991–92 before being waived. The player once predicted to be the greatest ever in the NBA had played just 441 games in 10 NBA seasons, slightly more than half the 820 scheduled