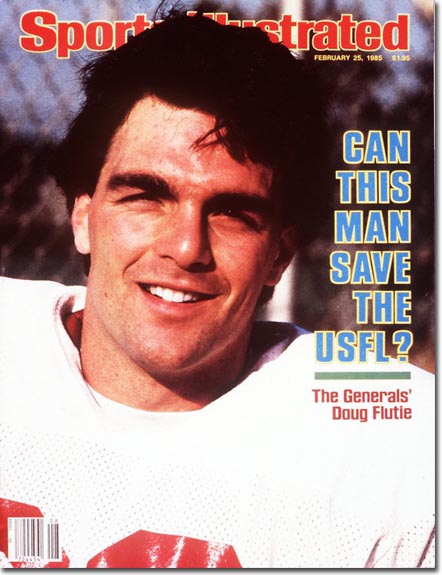 If I were Tim Tebow …I might want to take a long look at the career of Doug Flutie…deemed too short for the NFL at 5 foot 9 played in the USFL , the Canadian Football League (which has been suggested that Tebow really give it a try) and the NFL and along the way he proved that it wasn’t the height but the skill that made the player.

His “Hail Mary” touchdown pass in a game against Miami on November 23, 1984 (dubbed “The Pass) is considered among the greatest moments in college football and American sports history.

Flutie was seen as extremely attractive to the USFL, which was desperate for a star to reinvigorate the league as it was in financial difficulty.He was selected by the USFL‘s New Jersey Generals (owned by Donald Trump) in the 1985 territorial draft, which took place in January, months before the 1985 NFL Draft. Flutie went through negotiations with Trump and agreed on a deal that would make him the highest paid pro football player and highest paid rookie in any sport with $7 million over 5 years; Flutie was officially signed on February 4, 1985. Having already signed with the USFL, Flutie was not selected in the NFL Draft until the 11th round, 285th overall pick by the Los Angeles Rams.

Flutie entered the USFL with much hype and fanfare. However, many began to wonder if the scouts who said Flutie could not compete on the pro level were right. In February 1985, Flutie made his USFL debut against the Orlando Renegades. His debut was horrible, as his first two professional passes were intercepted by Renegades line backer Jeff Gabrielsen. The only two touchdowns that New Jersey scored came from turnovers by Orlando quarterback Jerry Golsteyn. By the time Flutie’s debut was over, he completed only 7 of 18 passes, for a total of 174 yards, while running for only 51 yards. Flutie completed 134 of 281 passes for 2,109 yards and 13 TD’s with the Generals in 1985 in 15 games. He suffered an injury late in the season that saw him turn over the reins to reserve QB Ron Reeves. The Generals went on to sport an 11-7 record and a 2nd-place finish in the USFL’s Eastern Conference. The USFL folded in 1986, and Flutie and punter Sean Landeta were the league’s last active players in the NFL.

On October 14, 1986, Flutie, who was originally drafted by the L.A. Rams, had his rights traded to the Chicago Bears in exchange for draft picks. Flutie would later make his debut on the 1986 Chicago Bears, appearing in 4 games.

Flutie was then traded to the New England Patriots at the start of the 1987 NFL season, a season which saw the NFL Players Association go on strike, and NFL games subsequently being played by replacement players. Flutie crossed the picket lines in order to play for the Patriots, and charges of being a scab dogged him thereafter. Flutie would remain with the Patriots from 1987–1989, after which he left to play in the Canadian Football League.

Flutie played in the Canadian Football League for 8 years. He is revered as one of the greatest quarterbacks ever to play Canadian football.Flutie won his first Grey Cup in 1992 with the Stampeders. He was named the Grey Cup MVP. Which is their version of the NFL’s Super bowl .

His career CFL statistics include 41,355 passing yards and 270 touchdowns. He holds the professional football record of 6,619 yards passing in a single season. He led the league in passing five times in only eight seasons. He once held four of the CFL’s top five highest single-season completion marks, including a record 466 in 1991 which was surpassed by Ricky Ray in 2005. His 48 touchdown passes in 1994 remains a CFL record. He earned three Grey Cup MVP awards, and was named the CFL’s Most Outstanding Player a record six times (1991–1994, and 1996–1997). He passed for 5,000 yards six times in his career and remains the only player in pro football history to pass 6,000 yards twice in his career.

Flutie became the Buffalo Bills‘ quarterback five games into the 1998 season. The Bills were initially uninterested in signing him, but then-pro personnel director A.J. Smith successfully convinced the organization that Flutie would be a great asset to the team. In his first action with the Bills, Flutie entered for an injured Rob Johnson and passed for two TDs while leading a fourth-quarter comeback against the Indianapolis Colts on October 11, 1998. The following week, Doug Flutie would make his first NFL start since October 15, 1989, against the unbeaten Jacksonville Jaguars. The nine-year gap between starts for a quarterback in the NFL was the second-longest in duration (behind Tommy Maddox) until the 2007 season. Flutie would be the hero of the Bills’ victory as he scored the winning touchdown against the Jaguars by rolling out on a bootleg and into the end zone on a fourth-down play in the waning seconds. The Bills’ success continued with Flutie at the helm; his record as a starter that season was 8 wins and 3 losses. Flutie was selected to play in the 1998 Pro Bowl, and is currently the shortest quarterback to make the Pro Bowl since 1970.[24]

Flutie led the Bills to a 10–5 record in 1999 but, in a controversial decision, was replaced by Johnson for the playoffs by coach Wade Phillips, who later said he had been ordered by Bills owner Ralph Wilson to do so. The Bills lost 22–16 to the eventual AFC Champion Tennessee Titans in a game that has become known for the Music City Miracle, where the Titans scored on the penultimate play of the game — a kickoff return following the Bills’ apparent game-clinching field goal.

The following season, Flutie was named the Bills’ backup and only played late in games or when Johnson was injured, which was often. In fact, during the season, Flutie had a 4–1 record as a starter, in comparison to Johnson’s 4–7. In a December 24, 2000 game against the Seattle Seahawks, Flutie achieved a perfect passer rating, completing 20 of 25 passes for 366 yards and three touchdowns. Following the 2000 season, Bills President Tom Donahoe and head coach Gregg Williams decided to keep Johnson as the starter and cut Flutie.

After Buffalo Flutie went on to play for the Chargers and the Patriots again this time as a backup to Tom Brady.