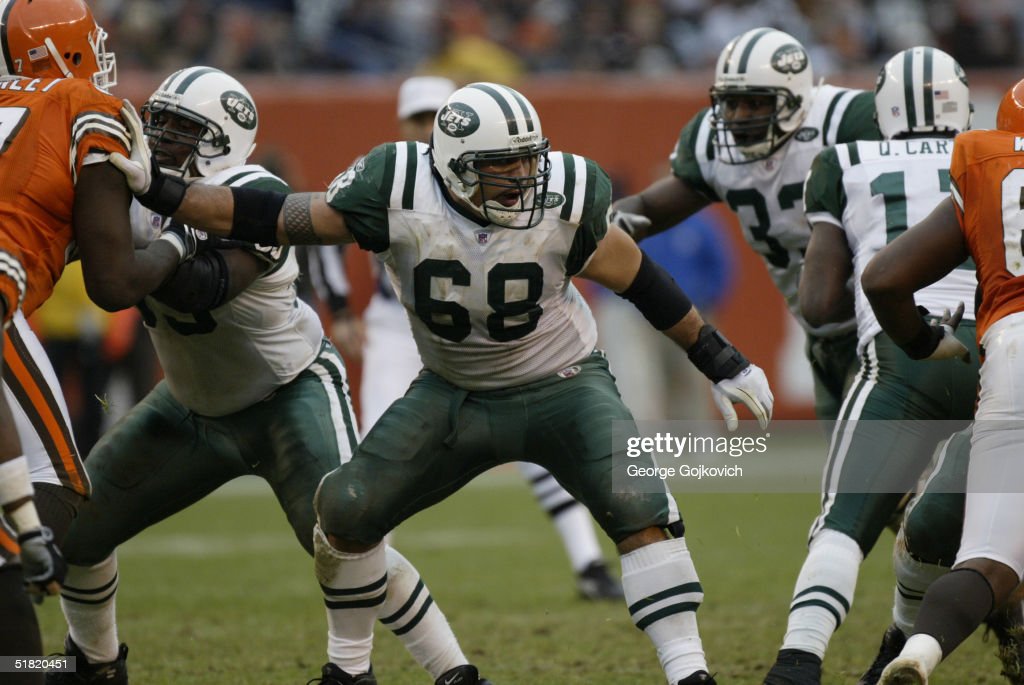 Kevin Mawae played center in the NFL for 16 seasons. He played for the Seattle Seahawks, New York Jets and the Tennessee Titans.

Mawae was originally drafted by the Seattle Seahawks in the second round (36th overall) of the 1994 NFL Draft.

Mawae saw his first pro action at right guard against the Oakland Raiders on September 11, and never left the lineup after taking over early in the game versus the Indianapolis Colts. He finished the season playing in 14 games, starting the final 11 at right guard. After the season Mawae earned first-team All-Rookie honors from Pro Football Weekly/Pro Football Writers Association, College and Pro Football Newsweekly and Football News. In 1995 he started all 16 games at right guard, seeing time at center in two games. He was moved to the center position at the start of his 1996 season and remained at that spot for the rest of his NFL career.

In 1998, Mawae was signed by the New York Jets. In his first season in New York, the Jets’ offense averaged 357.2 yards per game (second-best in AFC and fourth-best in NFL), while controlling the ball for an average of 32:17 minutes per game (second-best in AFC and third-best in NFL), also helped running back Curtis Martin to rush for franchise-record eight 100-yard rushing games en route to 1,287-yard season. He started all 16 games. In 1999, he was named to his first Pro Bowl on December 22, he did not miss a play for the second straight season and paved the way for Martin’s then franchise-record of 1,464 yards rushing, and snapped to four different quarterbacks; Vinny Testaverde, Chad Pennington, Rick Mirer and Ray Lucas.

During the 2000 NFL season, he was member of the line that tied Indianapolis Colts for fewest sacks allowed during regular season with 20. Also helped Jets offense average 337.2 yards per game was the 12th best in NFL and the passing offense averaged 245.3 yards per game (sixth in NFL). Mawae earned his second consecutive starting spot as AFC team Pro Bowl center he was selected to the Pro Bowl on six consecutive occasions (1999–2004). In 2002, he underwent offseason shoulder surgery to repair damage to left rotator cuff, he missed two preseason games but kept his consecutive games started streak by making 124th consecutive start in season opener against the Buffalo Bills.

His unbroken streak of 177 games came to an end in October 2005 with a serious triceps injury to his left arm, and he missed the rest of the season. On March 5, 2006, he was cut by the Jets.

Mawae was signed by the Tennessee Titans nine days later on March 14, 2006. In his first season with Tennessee, he helped the offense rank third in the AFC and fifth in the NFL in rushing with 2,214 yards. The Titans set a franchise record by averaging 4.7 yards per carry, and the offensive line, led by Mawae, finished tied for 10th in the league with only 29 sacks allowed.

In 2007, Mawae was voted team captain and started 14 games, helping LenDale White register his first career 1,000-yard season as he finished with 1,110.

In 2009, Mawae was ranked fifth in a Sports Illustrated poll of “dirty players”. The magazine surveyed 296 NFL players to come up with the ranking. Mawae was quoted on the Titans’ site as saying he was “proud” of the recognition because he plays the game hard, but conceded, “I’ve been known to leg whip a time or two. I’ve paid the price for those, both physically and in the pocket.”