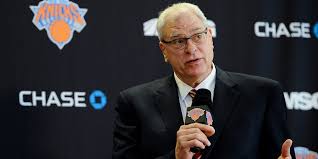 I liked Phil Jackson when he was a skinny defensive player for the Knicks back in the 70’s. I liked Phil Jackson better when he coached the Bulls and would bang heads with Pat Riley and then with Jeff Van Gundy. He would say things to tweek the Knicks and I get it was to get a advantage. But I don’t like Phil Jackson tweeking every body from Lebron James to his own star player Carmelo Anthony especially after a win against the Miami Heat in Miami. His timing is like a boxer past his prime in decline…off. Why make the following statement about your own player?
“Carmelo a lot of times, wants to hold the ball longer than (the Knicks want),” Jackson said. “We have a rule, if you hold a pass two seconds, you benefit the defense. So he has a little bit of a tendency to hold it for three, four, five seconds, and then everybody comes to a stop and that is one of the things we work with.”
He gave Carmelo Anthony 124 millions to be what he is a prolific scorer, not the second coming of Michael Jordan or Kobe Bryant or Shaq. He reminds of the late George Steinbrenner who would sign a free agent like Reggie Jackson or Dave Winfield and then ripped them for being something they were not. Reggie Jackson was a homerun hitter who struck out a lot and Dave Winfield was a great player but was not Reggie Jackson in the clutch. It took a long time for Steinbrenner to realize he was best served just let the money players be who they are. Phil Jackson isn’t Steinbrenner by any means but he needs to stop talking about other teams players and while he is at it stop killing your own players  as well. It doesn’t serve a purpose of making them better all it does it come decision time drive away a player like Anthony or make other players decide not to come here and get beat up in the press by the team president or have the team president undermine the coach and talk about a system that doesn’t fit the players playing now…and by the way for those of you who don’t know the Triangle which Phil Jackson so gloriously mentions at every turn, he didn’t invent and it was implemented for him by Tex Winter when Winter was a coach on Phil Jackson’s staff with the Bulls.
He has won 11 championships as a coach 2 as a player ironically for the New York Knicks 1969-70 and 1973-74) and he doesn’t let everyone forget it. But even with that many championships you don’t do it alone. You have to have all the right elements to make just one championship happen no less 11. Yet Phil Jackson believes he has done this all on his own. Do you think Carmelo and everyone in a Knick uniform is sick and tired of hearing about how Phil has won so many championship and the triangle ? I am sure they are …because I am sick of hearing it seeing it in print…Enough!
I liked him better when he coached against the Knicks because he was the enemy, now he is the enemy from within …enough already!