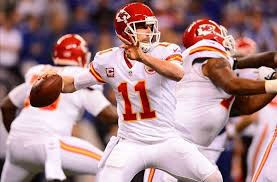 The AFC West has a been a wide ride this season Denver has had their moments, Oakland has had theirs …but Kansas City are the Chiefs of the division. They beat the Oakland Raiders 21-13 to seize firm control of the division sweeping Oakland (beating them twice this season) so they own the tie breaker in the event both teams end the regular season in a tie.

The Chiefs defense, playing without their veteran captain and leading tackler Derrick Johnson, who suffered a season-ending Achilles tendon injury in the second quarter, faced consecutive third-quarter drives starting in the red zone against an MVP-candidate quarterback in Derek Carr and a dynamic Raiders offense.

In holding the Raiders to just one field goal in those two red zone trips sealed the game in a tough gritty performance against their division rival.

“When situations happen like that it’s just, ‘Don’t panic. Stay calm,’ “said  cornerback Steven Nelson “Just do what we’ve been doing and have that killer mindset.” he continued.

“Big win. A huge win. On a short week, this late in the year, to overcome all that and get the win tonight. Defense, I think, played amazing,” quarterback Alex Smith said.