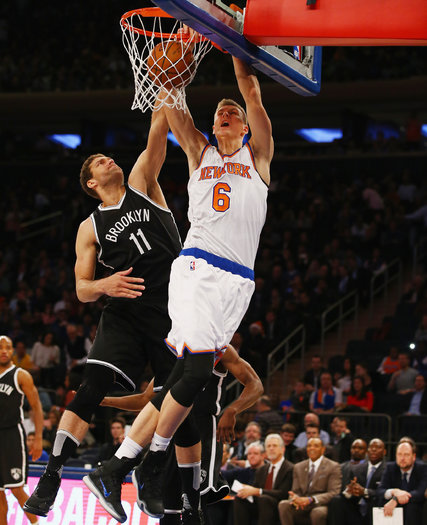 Fulldisclosure: I was among the Knick fans who wasn’t keen on Porzingis originally either but was willing to see what he had. I liked Karl Anthony Towns and hoped the Knicks could have worked a deal to get him, but I won’t lie I am happy to see how things worked out.

For the first time in a long time the New York Knicks are relevant, for the first time in a long time I want to watch Knick basketball on TV and look for something else to watch. For the first time in a long time the Knicks have a future to build on with they have all of their first round draft picks if they want to get aggressive and make an upgrade trade, and they have three picks in this upcoming draft. And finally they have their franchise player, their future superstar in Kristaps Porzingis aka KP6 or “The Zinger” Remember how on draft night Stephen A Smith led the chorus of what a bad job Phil Jackson did in drafting this kid? Remember how bad Knick fans howled at the sky for having Porzingis fall to their lap at number 4? Remember when on Draft Night Carmelo Anthony freaked out when the Knicks drafted Porzingis ? He isn’t freaking out anymore is he? Is anyone doing that anymore? Nope!

Now Knick fans are raising their heads up to the sky the hoop gods thankful that the Lakers passed on Porzingis and that D’Angelo Russell wasn’t there for the taking for the Knicks at 4. Every game he does something to continues to impress, that continues to show growth that continues to show skills that you don’t expect from a 7 foot 3 giant. He runs the floor like some one a foot shorter and shoots threes like a guard, and finally uses his height on postups and dunks.And something that Knick centers haven’t done since the Ewing days…block shots regularly!!!

We Knick fans are a tough fan base to please we know that. But Kristaps Porzingis has won over the fans by being himself and never shied away from making his play better and actually realizing he had a tough crowd to win over. But he did. And now the Knicks have a player, the real deal, and a future!