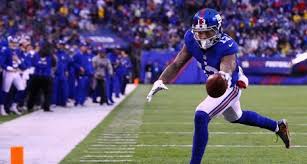 I have spent alot of time ranting against the New York Jets,but now is the time to give major raves to the real football team in New York …The Giants! Plain and simple short and sweet the Giants are playing dominate football especially on the defensive side of the ball. They play big in big moments and the money the spent on the defense has been well spent. Landon Collins keeps improving week after week, was there a tackle he wasn’t involved in? Dominique Rodgers Cromartie  chased down the Lions receiver to stop a game breaking play. And the final insult was the interception the took the air out of the Lions.

The Offense still doesn’t fire on all cylinders (Eli) yet they did enough to beat the Dallas Cowboys and the Detroit Lions in back to back weeks. The importance of the Giant wins? Both the Cowboys and Lions are division leaders and the Giants have kept the pressure on the Cowboys to keep winning. The Giants still have a outside shot of winning the division. At this point just beat who is in front of you not worry about who is in front of you in the standings.

Next up is the woeful Philadelphia Eagles … don’t look past them even though they are 0-5 in their last 5 games they are a division rival(0-4 in the division) and have always been a royal pain to the Giants as all Giants fans are painfully aware. If this isn’t a trap game then I don’t know what is …While this should be a win for the Giants nothing is a sure thing and the Eagles are due to win a game, you just don’t want it to be this week against the Giants.

9 thoughts on “Giants are Streaking at the Right Time”