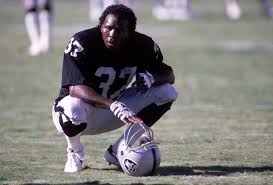 One of my favorite players was Lester Hayes. He was the shutdown cover corner. The Best.

Hayes was commonly referred to as “the Judge” and also as “Lester the Molester” because of his bump and run coverage. He was also known for using Stickum before it was banned in 1981 in a rule bearing his name. He had a distinct stance, crouching very low when facing the opposing wide receiver.He was known as one of the greatest shutdown cornerbacks in NFL history. In 1980, Hayes led the NFL with 13 interceptions, tied for second most with Dan Sandifer, who had set it in 1948, and behind Dick “Night Train” Lane with 14 in 1952, and was named AP Defensive Player of the Year and the NEA Defensive Player of the Year.His best performance was probably in Super Bowl XVIII. He had only one tackle, but that was because he so effectively covered Charlie Brown and Art Monk that Joe Theismann hardly threw to the left side of the field. During his last four seasons, he formed a partnership with Mike Haynes that has been considered one of the best in league history. Hayes and Haynes gave the Raiders the luxury of having two shutdown corners. They are widely reckoned as being the prototypes for a generation of speedy and physical cornerbacks.

He retired after the 1986 season with a total of 39 interceptions, a Raider record shared with Hall of Famer Willie Brown.

Stickum is a sticky adhesive substance that was introduced to Hayes when he was a rookie in 1977 by Hall of Fame wide receiver Fred Biletnikoff. However, instead of just applying a small amount to his hands to help him hold on to the football, Hayes started slathering it all over his arms and even on his uniform, drawing more and more attention to it. The use of Stickum was banned by the NFL in 1981.