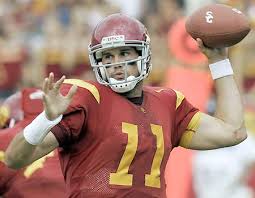 Welcome to this week’s Smallthoughts: Old School Tuesday. Today we are going to look at the careers of two quarterbacks who were big stars in college and a lot was expected in the pros and yet for one reason or another they didn’t shine as brightly as they did in college. First , let’s consider Matt Leinart.
Leinart was a Heisman Trophy winner (2004) and won the National Championship with the USC Trojans twice (2003, 2004) , And He was considered one of the top prospects coming out of the draft in 2006. He was the tenth pick overall by the Arizona Cardinals.

In 2004, USC went wire-to-wire at No. 1 in the polls and earned a bid to the BCS title game at the Orange Bowl against Oklahoma, which was also 12–0. A dream matchup on paper (including White vs. Leinart, which was to be the first time two Heisman winners would play against each other), the Orange Bowl turned out to be a rout, as Leinart threw for five touchdown passes on 18-for-35 passing and 332 yards to lead the Trojans to a 55–19 victory. Leinart received Orange Bowl MVP honors and the Trojans claimed their first BCS national championship and second straight No. 1 finish in the AP, extending their winning streak to 22 games. This victory and BCS championship was later vacated as a result of the Reggie Bush scandal (though the AP national championship still stands).

The 2005 Trojans again had a perfect 12–0 regular season. Against Notre Dame, Leinart threw for a career-high 400 yards. After an incomplete pass and a sack led to a fourth-and-nine situation with 1:36 left—at the Trojans’ own 26-yard line, Leinart called an audible “slant and go” route at the line of scrimmage and threw deep against the Irish’s man-to-man coverage, where Dwayne Jarrett caught the ball and raced to the Irish’ 13-yard line, a 61-yard gain. Leinart moved the ball to the goal line as time dwindled and scored on a quarterback sneak that gave the Trojans a 34–31 lead with three seconds to go, giving the Trojans their 28th straight victory and one of the most memorable and dramatic finishes in the history of the Notre Dame–USC rivalry. Leinart was again invited to New York for the Heisman ceremony along with teammate Reggie Bush and Texas quarterback Vince Young. As a former Heisman winner, Leinart cast his first-place vote for Bush, and ended up third in the voting behind Bush (since vacated) and runner-up Young.

The Trojans advanced to the Rose Bowl to face Vince Young and No. 2 Texas in the BCS title game. The title game was considered another “dream matchup.” Leinart himself had a great game, going 29-of-40 for a touchdown and 365 yards, but was overshadowed by Young, who piled up 467 yards of total offense and rushed for three touchdowns, including a score with 19 seconds remaining and two-point conversion to put the Longhorns ahead, 41–38. The Trojans lost for the first time in 35 games, and Leinart for just the second time in his 39 career starts. After graduation, Leinart’s No. 11 jersey was retired at USC.