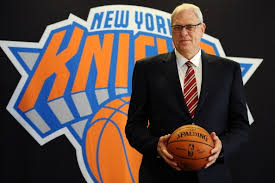 One would think that when you hire a decorated coach who has won as many championships as Phil Jackson has a a player (2) and as a coach (11) he would know what it takes to build a winning culture a winning team. However it is becoming more and more alarming by the day that Jackson doesn’t have a clue about how to translate his success as a coach into success as an executive. He isn’t the first to have failed at it and he won’t be the last but he has done considerable damage to a franchise that he once was linked to as a player. I know different time different era but picking a public feud with the player you signed to a 124 million dollar contract isn’t smart on several levels. It hurts his value if you truly are trying to move him. It hurts when you try to recruit other free agents to come to your team and it hurts you as the executive because you are perceived as creating a toxic environment. No one wants that. Only Phil Jackson can make James Dolan look like a model of stability with this franchise which is really hard to do. To be honest I didn’t think Jackson would be this bad, I expected better and thought he would instill a winning culture , it turns out to be the complete opposite. They have done more losing, more drama then when Donnie Walsh was running things because you knew he gutted the team and they were going to be bad as he broke it down. But today this team…He make it hard ro watch , you have a point guard who should be the leader on the floor leave the team and not tell anyone and just went awol. Whether or not you follow sports know anything about sports you know going awol on your job is a no -no.  Jackson is working o his third coach in his time with the Knicks and this coach also has no clue on defense. He doesn’t stress it and he doesn’t punish would be offender of those who don’t play it. Picture Jeff Van Gundy tolerating not playing defense …not happening, this team up front is flawed by the signing of Joquin Noah. The best knick lineup should feature Kristaps Porzingis at center, Carmelo Anthony at power forward and a solid small forward …With the current roster Noah at center and Porzingis at Power Forward all it does is force Anthony out of position at Small forward chasing smaller , quicker players and stressing an already weak team defensively into a weaker team. Jackson is paid 60 million dollars to know this. Little old me knows this and I don’t make 60 million of James Dolan’s money. He needs to fix this and fast. Trading Carmelo Anthony for Kevin Love isn’t the answer , it doesn’t give them the wing player they need, it doesn’t make them better neither now or in the future and all it does is make Carmelo Anthony a scape goat for the short comings of both a team president who more consumed with announcing his break up with his fiancé  on Twitter, giving a center (Joquin Noah) a 72 million dollar contract when no one was bidding that high for his services and didn’t think how this would make his roster up front structuredly unbalanced and a head coach who doesn’t demand they play real defense and then doesn’t bench his point guard when the said player went awol on the team. This has become a soap opera when it didn’t need to. So much for building a winning culture Phil.