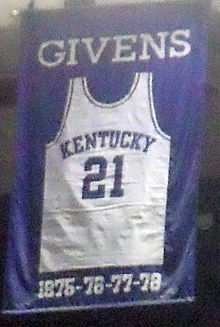 Givens earned Kentucky Mr. Basketball and Parade All-America honors after his senior year at Lexington’s Bryan Station High School in 1974. UK finished Givens’ freshman season as national runners-up, falling 92-85 to UCLA in the 1975 Final Four championship game. In 1978, Givens and Kentucky returned to the Final Four at the Checkerdome in Saint Louis, Missouri. After leading Kentucky to a semifinal victory over the University of Arkansas, he scored a career-high 41 points and made 18 of 27 field goal attempts against Duke to help Kentucky clinch their fifth NCAA Championship in men’s basketball.Givens lettered four times in varsity basketball from 1974–75 to 1977–78. In that span, he scored 2,038 points in 123 games (16.6 ppg), ranking third on the school’s all-time scoring list. He was named first team all-Southeastern Conference three times from 1976 to 1978 and was a consensus second team All-American in 1978. Kentucky retired Givens’ #21 jersey and a banner in his honor hangs in the rafters of Rupp Arena, Kentucky’s home court.

Givens led the University of Kentucky to the 1978 NCAA Men’s Division I Basketball Championship and was named that year’s Final Four Most Outstanding Player due in most part to his 41-point performance in Kentucky’s 94-88 victory over Duke University in the championship game.