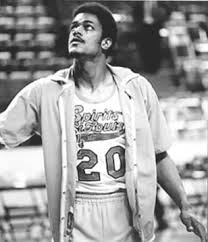 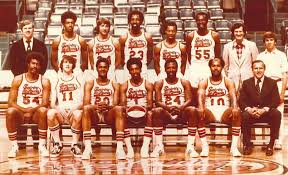 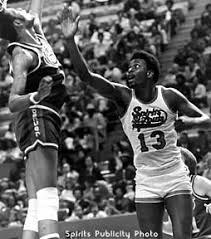 The Spirits of St. Louis were one of two teams still in existence at the end of the American Basketball Association that did not survive the ABA–NBA merger. They were a member of the ABA in its last two seasons, 1974–75 and 1975–76, while playing their home games at the St. Louis Arena.

The Spirits (who took their name from the Atlantic Ocean-crossing plane flown by Charles Lindbergh) were the third incarnation of a franchise that was once known as the Houston Mavericks and later the Carolina Cougars. However, only one player from the 1973–74 Cougars followed the team to St. Louis, so the Spirits were essentially an expansion team.

The Spirits were a colorful team featuring a number of players, both on and off the court, who were fairly successful in their basketball careers. Among them were Moses Malone, acquired during their second and final season, who went on to a long and successful career in the NBA, culminating in enshrinement in the Basketball Hall of Fame. Maurice Lucas spent most of his time in the ABA as a Spirit, then later became an all-star in the NBA with the Portland Trail Blazers. Other well-known players that played for the team included former Boston Celtics sixth man Don Chaney, future Celtics head coach M.L. Carr, and Ron Boone, who held the record for consecutive games played in pro basketball for many years. One of the most colorful players on the team was forward Marvin Barnes, famous for stories about his off-court behavior and lack of understanding of time zones.

A couple of off-court personalities from the team became well known as well. One of the coaches in 1975 was former NBA player Rod Thorn, who became the NBA’s vice president of basketball operations (or, in essence, the No. 2 man behind commissioner David Stern) for a number of years. On radio, the team featured Bob Costas as an announcer. Costas would go on to a highly successful career working for NBC television and radio.

After a slow start in their inaugural season, 1974–75, the Spirits reached the playoffs with a late rush, then upset the defending ABA champion New York Nets in the first round of the playoffs. But the team squandered this good start the following year. Despite inheriting several players (including Malone) from the Utah Stars after that franchise failed in the middle of the season, the Spirits finished well out of playoff contention in 1975–76 as attendance in St. Louis dwindled. At season’s end, negotiations were under way to move the franchise to Salt Lake City, Utah, and rename the team the Utah Rockies.

In the summer of 1976, with the ABA at the point of financial collapse after 9 years, the six surviving franchises (the Virginia Squires went bankrupt immediately after the final season) began negotiating a merger with the NBA. But the senior circuit decided to accept only four teams from the rival league: the Nets (the last ABA champion), Denver Nuggets, Indiana Pacers and San Antonio Spurs.

The NBA placated John Y. Brown, owner of the Kentucky Colonels, by giving him a $3.3 million settlement in exchange for shutting his team down. (Brown later used much of that money to buy the Buffalo Braves of the NBA.) But the owners of the Spirits, the brothers Ozzie and Dan Silna, struck a prescient deal to acquire future television money from the teams that joined the NBA, a 1/7 share from each franchise (or nearly 2% of the entire NBA’s TV money), in perpetuity. With network TV deals becoming more and more lucrative, the deal has made the Silnas wealthy, earning them $186 million as of 2008, according to the Cleveland Plain Dealer, and $255 million as of 2012 according to The New York Times. (The NBA nearly succeeded in buying out the Silnas in 1982 by offering $5 million over eight years, but negotiations stalled when the siblings demanded $8 million over five.) On June 27, 2007, it was extended for another 8 years, ensuring another $100 million+ windfall for the Silnas. In 2014, the Silnas reached agreement with the NBA to greatly reduce the perpetual payments and take a lump sum of $500 million. In the last few years before the lump sum agreement, the Silnas were receiving $14.57 million a year, despite being owners of a team that hadn’t played one minute of basketball in more than 35 years. The Silnas will, however, still be receiving a now much smaller portion of the television revenue through a new partnership with the former ABA teams the Nets, Nuggets, Pacers and Spurs.