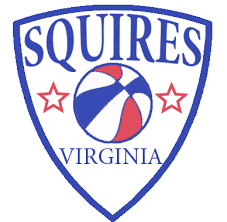 I know every Nets fans like to think that Dr.J was all theirs but he was originally a Virginia Squire, however Nets fans can be thankful for the Squires giving them Dr.J.

The Squires were a legendary ABA team, but not necessarily because of their success on the court. Instead, the Squires will always be remembered for unearthing (but not keeping!) future Hall of Fame players Julius Erving and George Gervin.

The Squires moved to Virginia in 1970 after spending one year in Washington, D.C. as the Washington Capitals (1969-70), and two years in Oakland as the Oakland Oaks (1967-69). Like The Floridians and the Carolina Cougars, the Squires were a regional franchise and played their games in several Virginia cities: Norfolk, Hampton, Richmond, and Roanoke. After the 1971-72 season, the Squires abandoned Roanoke, mainly because their attendance was much higher in the other three locations.

In each of their first two seasons in Virginia, the Squires almost made it to the ABA Finals. In the first round of the 1971 ABA Playoffs, Virginia beat Rick Barry and the New York Nets in a tough six game series. In the second round, the Squires held the home court advantage against the Kentucky Colonels and Dan Issel, but lost the series 4 games to 2.

After the addition of rookie Julius Erving the next season, Squires fans were optimistic that the team could win the ABA Championship. Their hopes seemed to suffer a severe blow, however, when team scoring leader Charlie Scott abruptly left the team a few weeks before the end of the regular season. At first, the absence of Scott didn’t seem to matter as Erving and the Squires easily swept the Floridians in the first round of the 1972 ABA Playoffs . The Squires had to go overtime at home in Game 1 for a 114-107 victory. Game 2 was on national television (CBS), and the Squires ran away with a 125-100 victory. The series then shifted to Miami. In Game 3, Erving scored an incredible 53 points as Virginia barely won 118-113. Game 4 was not close (despite the fact that Erving scored “only” 39 points) and the Squires closed out the series 115-106. In this series, Erving was simply dominant. He was the Squires’ high scorer in each of the four games, averaging 37.7 points per contest. He was also the team’s leading rebounder, with over 20 rebounds per game.

In the second round, the Squires had the home court advantage against a confident New York Nets team led by Rick Barry and rookie John Roche. The home team won each of the first six games of this classic series. With the series tied three games apiece, the do-or-die seventh game was played at the Scope in Norfolk. Since the Squires were playing at home, they seemed to have the edge. However, Game 7 was (at least by ABA standards) a low-scoring defensive affair, and the absence of Charlie Scott seemed to hurt Virginia. New York pulled out a close game, 94-88, and denied the Squires their chance at an ABA title.

Even though Virginia was eliminated, several Squires turned in record-setting performances in the 1972 Playoffs. Of course, Erving carried the team by averaging an amazing 33.3 points and 20.4 rebounds per game (leading the league in both categories in post-season play). George Irvine was an unheralded performer for the Squires throughout the playoffs, hitting 56 of 85 shots from the field for a startling 65.9 field goal percentage. He also hit 25 of 31 free throws for an 80.6% mark. Finally, Ray Scott and Bernie Williams performed admirably against the Floridians and New York. In Game 5 against the Nets, Scott unexpectedly scored 26 points and propelled the Squires to a crucial win. And the hot-shooting Williams replaced Charlie Scott and won over die-hard Squires fans.

For the 1972-73 season, Erving was still with the team (despite his attempt to jump to the Atlanta Hawks of the NBA), and George Gervin appeared on the scene. The two future Hall of Famers only played with each other in the latter portion of the season. However, the Squires were eliminated in the first round of the 1973 Playoffs by the Kentucky Colonels.

After the 1972-73 season, things fell apart for the franchise. Erving was sold to the New York Nets during the summer of 1973. Then, promising center Swen Nater was also sold to the Spurs. Finally, as Gervin began to blossom in his second year, he was sold to the San Antonio Spurs. Al Bianchi became known as the “Coach Who Lost A Superstar Every Year.”

While the sale of the team’s best players may have preserved the financial viability of the Squires franchise, they decimated the team and alienated the fans. Justifiably or not, most Squires fans felt that Earl Foreman had “sold out” the team. Attendance dwindled and, despite the best efforts of longtime Squires coach Al Bianchi, the Squires were horrible. During the last year of the ABA, the Squires barely managed to stay in business. In their final tumultuous year (1975-76) they had five different coaches during the course of the season. The Squires were not part of the ABA-NBA merger.
Smallthoughts:Old School Tuesday spotlights…The Virginia Squires.