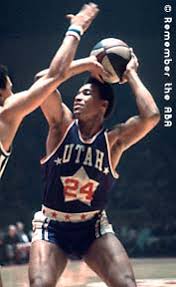 The team was founded as the Anaheim Amigos, a charter member of the ABA based in Anaheim, California. They played at the Anaheim Convention Center. The team’s colors were orange and black. The Anaheim Amigos were founded by Art Kim, a Hawaii native who had long been active in basketball as a player, Amateur Athletic Union administrator and owner. The Amigos lost the very first ABA game to Oakland, 132-129. They finished their first season with 25 wins and 53 losses, good for fifth place in the Western Division but not good enough to make the playoffs.The Amigos lost $500,000 in their first season, largely due to poor attendance; they only averaged 1,500 fans per game in a 7,500-seat arena. Kim realized he did not have the resources to keep going and sold the team to construction company owner Jim Kirst, who moved the team as the Los Angeles Stars in 1968 and played at the Los Angeles Memorial Sports Arena in Los Angeles, The franchise made an attempt to sign legendary center Wilt Chamberlain. Chamberlain did not sign with the Stars (though he did later coach the ABA’s San Diego Conquistadors). With 33 wins and 45 losses, the Stars improved from their first season but again finished fifth in the Western Division and did not make the playoffs.

In October 1969 the Stars signed Zelmo Beaty away from the NBA’s Atlanta Hawks, but Beaty had to sit out the season due to a one-year option held by the Hawks, which the Stars would not buy out for $75,000. First year players Mack Calvin and Willie Wise signed with the Stars. The Stars finished fourth in the Western Division with a record of 43-41, earning the first winning season in franchise history and a playoff berth. The Stars defeated the Dallas Chaparrals 4 games to 2 in the Western Division semifinals and bested the Denver Rockets 4 games to 1 in the semifinals before losing the ABA championship series 4 games to 2 to the Indiana Pacers. Kirst had not anticipated the fast turnaround, and did not book the Sports Arena for several dates. They had to play several first and second round games in their old home in Anaheim, as well as at the Long Beach Sports Arena in Long Beach. This turned out to be their final game as the Los Angeles Stars.

Little known fact …this franchise featured legendary ABA iron man Ron Boone who played in 1,041 games straight in both the ABA and then in the NBA

The Stars would face the Kentucky Colonels in the ABA Championship. In game one a near-capacity crowd filed into the Salt Palace to watch the Stars defeat Kentucky 136-117. The Stars set an ABA Playoff record by scoring 50 points in the 2nd quarter. In game 2, the series continued its high scoring with the Stars beating Kentucky 138-125. The series shifted to Louisville and Kentucky took games 3 and 4, tying the series up at 2-2. The series then returned to Salt Lake City, where the Stars beat Kentucky 137-127, taking a 3-2 series lead. The Stars looked to wrap up the ABA Championship with a game 6 victory in Louisville. However Kentucky clawed their way to a 7th game, barely beating the Stars 105-102, sending the series to a decisive 7th game back in Salt Lake City.

With the ABA Championship on the line, an ABA record crowd of 13,260 packed into the Salt Palace to watch game 7 of the 1971 ABA Championship. The game remained close throughout, however the Stars pulled away late, winning the 1971 ABA Championship 131-121.  As the game ended, hundreds of Stars fans rushed the court, lifting players onto their shoulders in a jubilant celebration. The actions were a total surprise to Stars officials, as they had not anticipated such a reaction from the fans.

The ABA teams frequently played exhibition games in the preseason vs. NBA teams. While the ABA overall had a winning record vs. the NBA in head to head competition, the Stars had an overall record of 7-9 against NBA teams.

Little known fact …the Utah Stars drafted Hall of Famer Moses Malone as a 19 year old out of High School in 1974 . Almost unheard of back in it’s time. (Bill Willoughby and Darryl Dawkins were the only ones to be drafted straight out of High school back then)

In the very last game ever played between ABA and NBA teams, the Stars defeated the Milwaukee Bucks 106-101 in Salt Lake City on October 21, 1975. (In the penultimate ABA vs. NBA matchup, the ABA’s Kentucky Colonels defeated the Washington Bullets 121-111 two nights prior.)