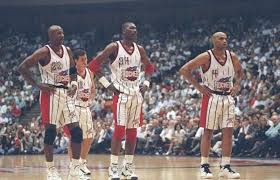 Let’s set the record straight on this nonsense of Super teams…the NBA has always yes ALWAYS had them. It’s just a shame that fans today believe this is new. Nope. In the past OWNERSHIP put together pairings like Kareem , Magic and James Worthy, the Celtics of the 60’s, What the 76ers did with Julius Erving and George Mc Ginnis in the 70’s  the Lakers pairing of Jerry West, Elgin Baylor and Wilt Chamberlin. The difference is now the PLAYERS own the power and have the leverage to put together their own super teams with the owners and general managers being nothing more than bean counters and enablers to the players. By the way the Super team approach continued with the Houston Rockets with Hakeem, Charles Barkley and Clyde Drexler.So this isn’t something that is starting up but something that is continuing with the players now calling the shots looking for both the money and the best chance to win NOW! The money is bigger the players are looking to cement their legacies in big way, no more of the days of toiling for a team hoping to win a championship now the goal is to win multiple championships in the shortest amount of time and get paid the most as well. Guess what? Didn’t the Celtics do that back in the day? The Lakers? Sure did. So how is it any different now?