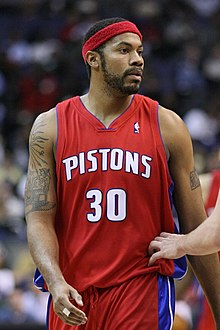 Talk about about a player who was multitalented yet drives everyone crazy…Rasheed Wallace was it. Known for his passion for collecting technical fouls in bunches as well as his all round player Wallace could make you cheer and go what was he thinking in the same sentence.

Originally selected by the Washington Bullets (now known as the Washington Wizards) as the fourth pick in the 1995 NBA draft, Wallace was named to the All-Rookie second team following his first season. He was then traded to the Portland Trail Blazers after the season. With Portland he was a key member of the Trail Blazers team that made it to the Western Conference Finals in 1999 and 2000, and was an NBA All-Star in 2000 and 2001. Wallace averaged a career best 19.4 points per game in 2002 for the Trail Blazers.

During the 2003–04 season Portland traded him to the Atlanta Hawks where he played one game before he was traded to the Detroit Pistons. With the Pistons, Wallace won the NBA championship in 2004, but lost the NBA Finals in the following season. Individually, Wallace was an NBA All-Star in 2006 and 2008. After the 2008–09 season, Wallace left the Pistons as a free agent and signed with the Boston Celtics, where he played until retiring in 2010. He returned to sign a one-year deal to play for the New York Knicks in 2012.