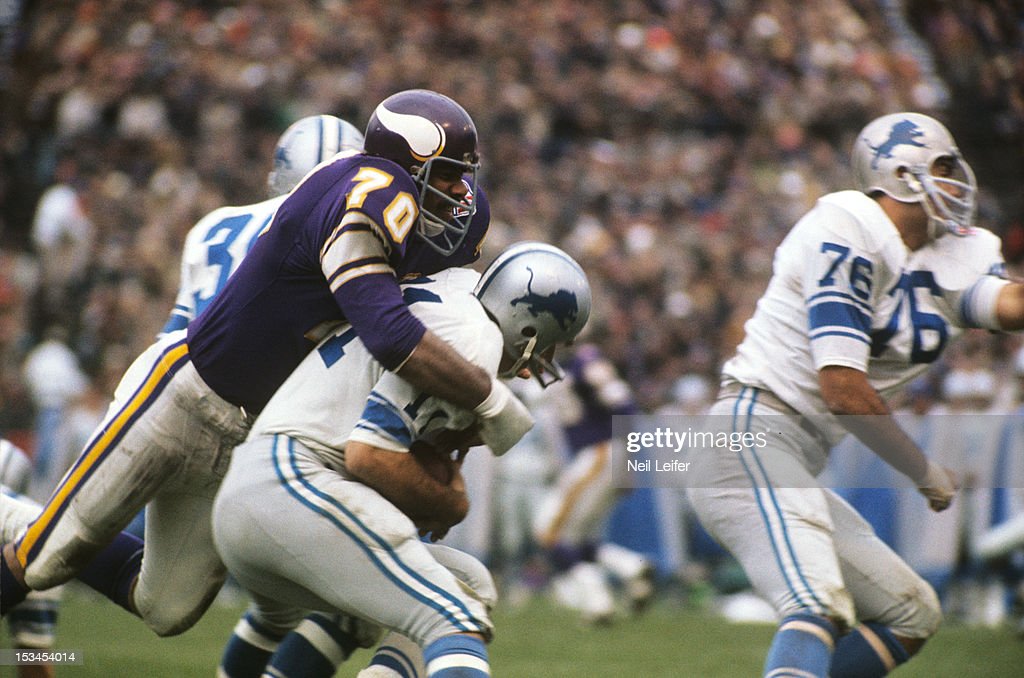 Just a question…Look at the size of Jim Marshall from back in the day …do you think he culd have played in today’s NFL? Just a Smallthought…

Jim Marshall was drafted in the fourth round of the 1960 NFL Draftwith the 44th overall pick by the Cleveland Browns. Marshall played the 1960 season with the Browns before being traded along with five other players (including fellow defensive lineman Paul Dickson) to the Minnesota Vikings in exchange for two draft picks in the 1961 NFL Draft. He then played from 1961 to 1979 with the Vikings and finished with a then-record 282 consecutive games (since surpassed by Jeff Feagles). He started 270 consecutive games while playing for the Vikings, an NFL record since surpassed by Brett Favre.

He played in 2 Pro Bowls from 1968 to 1969. He recovered 30 fumbles, an NFL record. He was a member of the Vikings’ famous “Purple People Eaters” (which consisted of Marshall (DE), Alan Page (DT), Gary Larsen (DT), and Carl Eller (DE), and was the final player from Minnesota’s initial expansion team of 1961 to retire. The Vikings credit Marshall with 127 career quarterback sacks, second most in Viking History behind Eller. He is one of 11 players to have played in all four of the Vikings Super Bowl appearances in the 1970s.

Marshall is best known though for what is called the wrong way run as you will see on the the second video below.

He was involved in what is considered by many, to be the most embarrassing moment in NFL history. On October 25, 1964 in a game against the San Francisco 49ers, Marshall recovered a fumble and ran 66 yards the wrong way into his own end zone. Thinking that he had scored a touchdown for the Vikings, Marshall then threw the ball away in celebration. The ball landed out of bounds, resulting in a safety for the 49ers.

While the moment was embarrassing the Vikings won the game 27–22, with the final margin of victory provided by a Carl Eller touchdown return of a fumble caused by a Marshall sack.