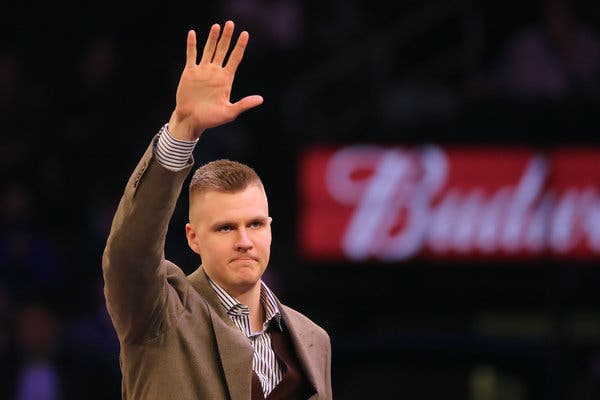 I have been a Knick fan since the season that they won their first championship, my grandfather took me to my first Knick game. I have seen this franchise at it’s best and rooted for it at it’s worst.There are times when I believe Dolan is what is wrong with the Knicks …the reign of horror with Isaiah Thomas, the forced feed Triangle with Phil Jackson but for now I reserve judgement on Knick management on this twist in the plot. My friend Brian shot me text about Porzingis meeting management with concerns about the direction of the team of which I thought and relied he has no leverage what’s his beef? Then within minutes he texted me again about this trade …I followed the story and then it became offical. Porzingis, Courtney Lee, Tim Hardaway Jr and Trey Burke to the Dallas Mavericks for Wesley Matthews, DeAndre Jordan and Dennis Smith Jr. I was for lack of a better word stunned…they did what? How could they pull off a deal this huge in this short of time? Why would you trade your franchise player ? I received  another text…I know you didn’t see this coming did you? I replied no I didn’t. Even now as I write this entry my phone is blowing up from the texts as my friends and I try to make sense as to what happened and what possibly will happen and what the fall out is if things don’t work out. My original thoughts were to kill the Knicks on this deal, so close to the finish line of Tanking the season…and believe after a certain point it makes sense to Tank. yet my gut says Kristaps Porzingis had more to do behind the scenes to push the Knicks toward this deal , their meeting with him on Thursday just confirmed what they knew…their big franchise player who accomplished in his time here in New York did not want to be here. He complained behind the scenes, even though he put a very public face of the team is heading in the right direction. He didn’t want to stay patient, so the Knicks for once did something smart …they took back  expiring contracts not bloated contracts into the next decade. They did get back a young player in Dennis Smith Jr that they could add to their core and they created salary cap space for two max free agents this summer. This is a huge risk, but …for now they made the best deal in theory if they get Durant /Kyrie or Klay Thompson and Durant or Kawhi Leonard and Durant or Kyrie. All are IFS until we see further what happens next. But for now marked my stunned on this deal but not ready to kill Knick management …for once.