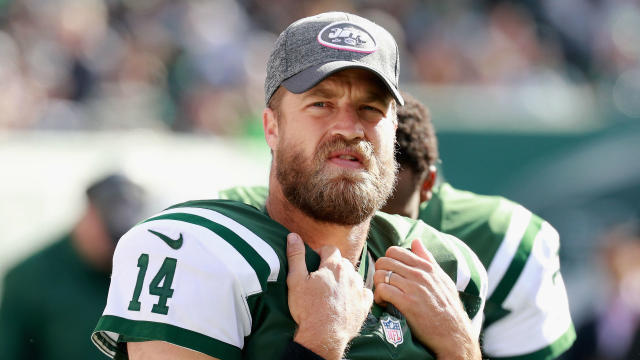 Ok let me make sure I get this straight , you spend the off season holding out because coming off a career year you want big money and more than what you eventually settle for …then you stink up the place leading your team to a 1-5 record you get benched and then after a rare win you say…

Asked directly if he felt the Jets’ owner, GM, and coaches have stopped believing in him here, Fitzpatrick said “Yeah, I think when you get put on the bench that’s the reason why.”

That’s major big ones …you stink up the joint for 6 weeks and you point fingers at your bosses??? Seriously???

Hey Mr. Fitzpatrick  news flash EVERYONE STOPPED BELIEVING in  QUARTEBACK THAT IS leading the NFL with 11 interceptions, including nine in a two-game stretch. You don’t get it. Your play stinks which is why you were benched. Only a injury to Geno Smith is what got you back in the game. It wasn’t like you had a bad game you several bad games on the way to a 1-5 start. Yes We all know the schedule was brutal but to be honest if you played better the jets could have come out that 6 game stretch at least 3-3 and then with the soft part of the schedule could load up your record.

But you’re play was so bad that your bosses had no choice but to turn to the one no one wanted to see play Geno Smith. Your play was so bad that even Geno looked good until he got hurt and didn’t return. So please don’t make this about woe is me …The Owner , the GM, the coaches didn’t believe in me nonsense, they didn’t believe in you because your play was that bad it stunk! Plain and simple !

Play pissed off but play pissed off at yourself for lousy,sloppy, uninspired play for 6 weeks and only after getting benched does the light come on!!! Look in the mirror and really be honest and get real with yourself about your play this season then get pissed at only one person…yourself!

6 thoughts on “Smallthoughts: Jets Finally Win a Game, Fitz Goes and Pops Off”