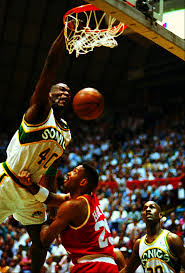 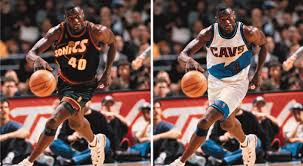 Sometimes potential is a word that few can live up to, or in some cases just leave you wondering what if ? Kemp is the what if? What if he played hard everynight? What if he came to play with desire and showed up in shape? What if substance abuse wasn’t a factor in his career? Yes What if indeed. But even playing up to half his potential Shawn Kemp gave fans spectacular moments.

The Seattle SuperSonics drafted Kemp in the first round of the 1989 NBA draft. Although extremely athletic, Kemp was the youngest player in the NBA at that time and struggled to find his place. In his first season in Seattle, Kemp was mentored heavily by teammate Xavier McDaniel. As the season progressed, so did Kemp’s skills, which propelled him into stardom. Kemp began to find his place in the NBA as a star during his second season with the Sonics. Together with Gary Payton, Eddie Johnson, Ricky Pierce and Nate McMillan, they became a highly successful squad.

After Kemp’s second NBA season, he picked up the nickname “Reign Man” after Sonics announcer Kevin Calabro saw a poster with the name and thought it fitting to add to his radio broadcasts.

Kemp’s career peaked in 1995–96, when he and Payton led the Sonics to a franchise-record 64 wins and their first NBA Finals appearance since 1979. They faced Michael Jordan and the Chicago Bulls, who were coming off an NBA record 72 wins. The Sonics pushed the heavily favored Bulls to six games before losing. In the finals, Kemp posted per game averages of 23.3 points on 55% shooting from the field, 10.0 rebounds and two blocks.

Following the 1996–1997 season, Kemp was part of a trade sending him to the Cleveland Cavaliers, Milwaukee Bucks forward Vin Baker to the Sonics, and Terrell Brandon and Tyrone Hill from the Cavaliers to the Bucks.

Kemp played three seasons with the Cavaliers, while battling extreme weight problems and often appeared to lack the drive that made him such a force in Seattle. Despite this, he posted career-high numbers for points per game in 1997–98 and led the Cavaliers to the NBA Playoffs where they faced the Reggie Miller-led Indiana Pacers, the Cavaliers would however lose to the Pacers in four games despite Kemp averaging 26 points with 13 rebounds a game in the series.

During the lockout shortened 1998–1999 NBA season, Kemp reportedly showed up to training camp weighing 295 pounds, though Cleveland’s then general manager Wayne Embry revealed that he was actually 325 pounds. Though unable to shed the weight, Kemp still managed to average 20.5 points and 9.2 rebounds.

Again What if he showed up in shape at the point in his career? But regardless Smallthoughts: Old School Tuesday spotlights the spectacular …Shawn Kemp.