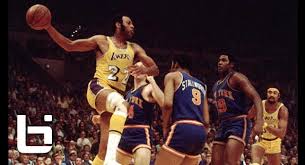 Welcome to Smallthoughts: Old School Tuesday. Today fans often talk about the Big 3 as if this is a new concept but look at the past teams that won there was always a big 3 Celtics had a big 3 and the yes oold school Lakers had a big 3 …Wilt Chamberlain, Jerry West aka The NBA Logo and the one very few talk about the very impressive Elgin Baylor.
He played 13 seasons as a small forward in the National Basketball Association (NBA) for the Minneapolis / Los Angeles Lakers, appearing in eight NBA Finals. Baylor was a gifted shooter, strong rebounder, and an accomplished passer. Renowned for his acrobatic maneuvers on the court, Baylor regularly dazzled Lakers fans with his trademark hanging jump shots. The No. 1 draft pick in 1958, NBA Rookie of the Year in 1959, 11-time NBA All-Star, and an 10-time member of the All-NBA first team, he is regarded as one of the game’s all-time greatest players. In 1977, Baylor was inducted into the Naismith Memorial Basketball Hall of Fame
How good was Baylor?
As a rookie in 1958–59, Baylor finished fourth in the league in scoring (24.9 points per game), third in rebounding (15.0 rebounds per game), and eighth in assists (4.1 assists per game). He registered 55 points in a single game, then the third-highest mark in league history behind Joe Fulks‘ 63 and Mikan’s 61. Baylor won the NBA Rookie of the Year Award and led the Lakers from last place the previous year to the NBA finals, where they lost to the Boston Celtics in the first four-game sweep in finals history. Thus began the greatest rivalry in the history of the NBA. During his career, Baylor helped lead the Lakers to the NBA Finals seven more times.
From the 1960–61 to the 1962–63 seasons, Baylor averaged 34.8, 38.3 and 34.0 points per game, respectively. On November 15 of the 1960–61 season, Baylor set a new NBA scoring record when he scored 71 points in a victory against the New York Knicks while grabbing 25 rebounds. In doing so, Baylor had broken his own NBA record of 64 points that he had set in the previous season. Baylor, a United States Army Reservist, was called to active duty during the 1961–62 season, and being stationed in Washington state, he could play for the Lakers only when on a weekend pass. Despite playing only 48 games during the 1961–62 season, he still managed to score over 1,800 points.  Which if you took  48 games and divide that by 1800 points …37.5 points per game average . Later that season, in a game five NBA Finals victory against the Boston Celtics, Baylor grabbed 22 rebounds and set the still-standing NBA record for points in an NBA Finals game with 61.
Smallthoughts: Old School Tuesday spotlights…the spectacular Elgin Baylor.